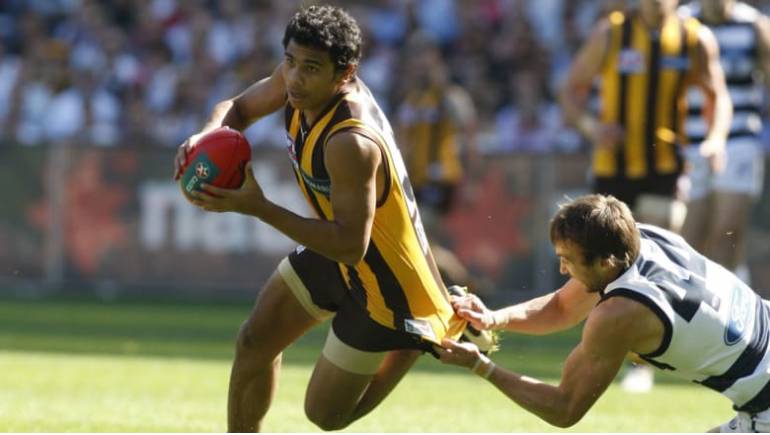 Posted at 04:53h in Uncategorised by cchua

There were seven minutes left in the third quarter of the 2008 grand final. With the Hawks a goal up, Cyril found himself outnumbered three to one on the wing – he fought, he tackled, he tapped, he dispossessed, he dived, he tapped, he tackled again and won the ball. The 18-year-old first-year player had no right winning that ball but he left the Geelong trio dazed and confused as he executed a heist under the glare of over 100,000 people.

Genuine sporting superstars leave you wide-eyed wondering how they did it. If Federer glides, Jordan floated, Bolt jogged and Ali danced, then Cyril appeared … in different locations, without notice. There were times when I didn’t see Cyril move but all of a sudden there he was tackling a terrified defender, spoiling an unwitting midfielder or at the bottom of a pack tapping the Sherrin to advantage.

If Cyril was 50 metres away, he was “in the contest”. He was unbelievable, unexplainable, unreal. This is why he made us feel the way we did. He infused us fans with something special – it wasn’t really butterflies, but it was more than excitement.

Most players have to be in possession of the ball before they engage the fans. Not Cyril. He simply had to be near the contest and that feeling rose inside us, then we rose from our seats and on more than one occasion I had to hold the person next to me as I cheered and roared and became light-headed from sheer joy.

“Hodgey was tough, Mitch got leather poisoning, Roughy racked up the goals and Cyril … umm …he…”

We never quite knew how to describe his deeds – they were things we’d never seen on a football ground before. He changed what was possible.

I was among thousands of fans in 2014 who offered their own hamstrings to replace the damaged one Cyril was nursing. The diagnosis had him on the sidelines for at least ten weeks.

“Have you heard? Cyril could miss finals.”

“Surely he’ll be back. Can we do it without him?”

“I heard he was running today”

“Is he kicking yet?”

“They reckon he’ll play for Box Hill in the VFL grand final.”

And he did. And he just did enough before being benched and kept on ice for the AFL decider six days later.

I’ll never forget how I felt when his selection was confirmed later that week. I can’t imagine the second coming exciting me like this did.

“Will he have an impact after nearly three months off?”

As we saw Cyril walk to the middle for the first bounce of the ball, we knew this was going to be a special day. He only had 9 possessions but he had a huge impact – on the opposition, on his teammates, on the fans and on the result.

I can’t explain it, I’m just grateful I got to enjoy it. Thank you Cyril for what you did for the Hawthorn Football Club and thank you for the highlight reel but most of all, thank you for the way you made us feel.

Anthony ‘Lehmo’ Lehmann is the host of ABC Grandstand